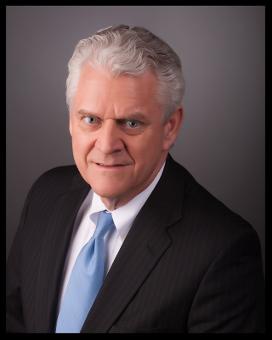 Mr. Locher is a native of Monticello, Iowa and is one of the founding members of the firm of Locher Pavelka Dostal Braddy & Hammes, LLC, the first law firm allowed to be organized as a Limited Liability Company by the Nebraska Supreme Court. He has practiced law in State and Federal Courts in Iowa and Nebraska since 1978.  He is widely recognized as a skilled and experienced trial attorney who has represented clients in numerous jury trials to verdict, bench trials and arbitrations before tribunals in Iowa and Nebraska. He was an early participant in alternative dispute resolution (ADR) and has participated in multiple mediations and other forms of ADR over the past thirty years.

He has served as an arbitrator in complex disputes and has been called upon as an expert witness in professional liability, insurance coverage and attorney fee disputes. He has tried cases involving trucking accidents, products liability, professional negligence, fraudulent transfers, common law indemnity, recreational liability, fire losses, admiralty and maritime, Jones Act and complex contractual claims.  He has argued well over sixty appeals in the Nebraska Court of Appeals, the Nebraska Supreme Court, the Iowa Court of Appeals, the Supreme Court of Iowa and the 8th Circuit Court of Appeals. His appellate work has included insurance coverage disputes, banking law, subrogation, admiralty and maritime, products liability, negligence, professional liability, political subdivision tort claims, recreational liability, and other contract disputes. He has been called upon innumerable times to issue insurance coverage opinions and to provide training for insurance company claims handlers. Mr. Locher has participated in authoring proprietary compendia of insurance law in Iowa and Nebraska and has conducted presentations and seminars in a variety of insurance, litigation and banking topics. Mr. Locher has conducted multiple examinations under oath and participated numerous times in fraud and arson investigations. He has testified before committee in the Nebraska Legislature on proposed bills of interest to the insurance industry and business community.

* Fellowship in The American College of Trial Lawyers is by invitation only after careful investigation to those experienced trial lawyers who have mastered the art of advocacy and whose professional careers have been marked by the highest standards of ethical conduct, professionalism, civility and collegiality. Membership cannot exceed one percent of the total lawyer population of any state or province.

** The American Board of Trial Advocates is an invitation only organization for lawyers with significant trial experience and who exhibit virtues of civility, integrity and professionalism.

*** Martindale-Hubbell is the facilitator of a peer review rating process. Ratings reflect the anonymous opinions of members of the Bar and the Judiciary. Martindale-Hubbell Peer Review Ratings fall into two categories-legal ability and general ethical standards.